World Education is dedicated to improving the lives of the poor through education, and economic and social development programs.

Mother's Associations in Benin: Advocates and Agents for Girls' Education 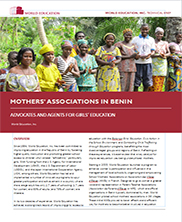 This Technical Brief highlights the role that School Mother's Associations have played in strengthening both women's roles in Benin communities as well as the education of girls across Benin. The Brief maps out the beginning of the initiative in 36 pilot villages and the scale-up of the mother's associations--known as Association des MÃ¨res dâElÃ¨ves (AMEs) in French to more than 650 communities under the USAID-funded Girls and Women's Education Program.

The document also maps out some of the issues confronted in the program, from teacher absenteeism to high drop-out rates for girls, as well as literacy in mother-tongue languages. Results include a 30% improvement in school attendance rates, reduced drop-out rates, and improved school performance. Furthermore, though the women and girls have had to overcome many obstaclesâincluding sexual harassment, traditional duties at home, attitudes about the worthlessness of girlsâ receiving education, and unequal treatment in the classroomsâwomen have gained information and negotiating skills as well as confidence, which enables them to stand up in front of community audiences and to become more active and visible in public fora. This is of critical importance to Beninâs development, because empowering women and promoting girlsâ education buoys the entire country, as demonstrated repeatedly in other nations. World Education, 2015.